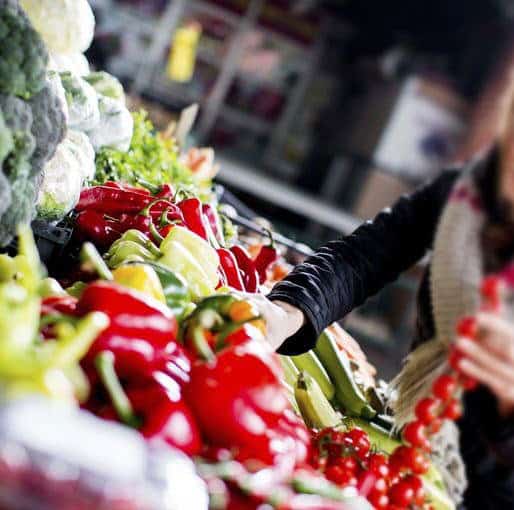 You know the drill. Shop local. Eat seasonal. And, hey, call your mother every once in a while, okay?

We’re sorry. We don’t mean to nag. It’s just that adopting a seasonal diet is a universal win-win. Foods that are in season are treated with fewer chemicals and preservatives, cause drastically less environmental wear and tear, and are better for your body, too.

“When picked at their peak, fruits and vegetables are likely to be richer in vitamins, minerals and antioxidants than those picked before they were ripe and shipped across the country,” explains Sidney Fry, MS, RD and assistant food and nutrition editor at Cooking Light magazine. “Once a fruit or vegetable is picked from the vine, it is cut off from the source of nutrients and begins to undergo quality and nutrient degradation.”

Better still, by focusing on what’s in season, you are more likely to experiment with new ingredients and build meals around fresh, healthy fare all year long. “Eating seasonally is motivation to build meals around foods that have just been harvested – incentive to try something new,” adds Fry.

Ready to give your diet a major makeover? Here is a month-by-month guide to timely taste, from hardy winter greens to the summer’s sweetest melons. Bon appetit!

With temperatures at their coldest across the USA, now is the ideal time for hale and hardy vegetables like spinach. Don’t be afraid to get hot and heavy with yours: spinach is one of the only vegetables that is actually more nutrient-rich after it has been cooked.

Superfood du jour kale is high in Vitamins K, A and C, and is a common ingredient on health-conscious menus from Chez Panisse to Chipotle. Shred it into slaws, roast it until warm and wilted, or bake at low heat for the healthiest chips in town. You’ll see what the fuss is about.

It’s easy being green at Baltimore, Md.’s Woodberry Kitchen, where Chef Spike Gjerde’s hyper-local menu focuses on seasonal fare like mustard greens from Maryland’s Side by Side Farms. He serves them in a pot pie with turnips, thyme and humanely raised turkeys from nearby Wholesome Living farm. Talk about eatin’ good in the neighborhood.

After years of denigration to the kids’ table, Brussels sprouts are finally getting the respect they deserve. Try them at Portland, Maine’s cult sandwich shop Blue Rooster, where the buds are fried until crispy, then tossed with sesame, sweet chili sauce and queso fresco. It’s an awfully indulgent way to get your beta-carotene on.

Chinese cabbage can be grown year-round, but it thrives in colder months. At Manhattan’s The Little Beet, a healthy counter joint helmed by Top Chef Masters’ Franklin Becker, the crunchy stuff is shredded into a main-course salad alongside green apples, scallions and rice noodles in a tangy, soy-based vinaigrette.

The first leeks of the season start appearing in farmers’ markets in the northern USA in February. Cousins to onions and garlic, leeks are rich in vitamin A and phytonutrient content. Get ready to go long.

Rich, meaty cauliflower stalks into farmers’ markets across the country this month. At Dan Barber’s groundbreaking Blue Hill at Stone Barns restaurant in Westchester County, N.Y., cauliflower filets are served with sides like bone marrow and creamed spinach in a clever twist on steakhouse cuisine.

In California, particularly the southern Coachella Valley, artichokes reign supreme from March until May. The thorny thistle is packed with antioxidants, aids digestion and liver functions, and may be beneficial in cancer prevention. Try them fried, roasted or even sipped at cocktail hour: Italy’s Campari Group bottles an artichoke liqueur called Cynar, which might just be the world’s most perfect early spring aperitif.

Had your fill of root vegetables and hardy greens? Spring vegetables like asparagus start to appear in the mid-Atlantic and southern regions of the USA this month. Low in fat and loaded with vitamins A, K, E and C, the spears can be green, white or purple. Taste the rainbow.

Farm-fresh strawberries at the market are a surefire sign of spring. Toss them with mint and lightly sugared yogurt for dessert, chop them into green salads for a touch of sweetness, or grab them by the handful – one cup of raw strawberries fills 100% of your daily recommended vitamin C intake.

Sweet cherries are a bona fide Southern tradition: they are baked into pies, boiled into compotes or, of course, eaten straight from the bowl. (Mind the pits.) Filled with antioxidants and high in fiber and potassium, cherries are also believed to help relieve arthritis pain and can help alleviate gout.

Rhubarb brings tart sweetness (and rosy-hued countertops) to kitchens across the country this month. Think pink at Lemaire, a Richmond, Va. mainstay where farm-to-table meets fine dining. Chef Walter Bundy, who cut his teeth at seasonal pioneer The French Laundry, celebrates the Virginia bounty in a classic rhubarb cobbler.

Antioxidant-rich, heart-healthy basil is commonly associated with Mediterranean cooking, but has globetrotting roots that span India and China’s Hunan Province. This season, pick up bunches by the bushel. You can stir the leaves into sauce, sprinkle them onto sandwiches, blend into pesto or give a rough chop to kick up even the most humdrum weekday salad.

Sure, in the off-season – and in a pinch – a handful of dried figs will do the trick. But those puny prunes have nothing in common with the rich, luscious fruit hitting farmers’ markets fromSonoma to Syosset this month. Figs are best super ripe, so soften fresh ones on a towel-lined tray on your kitchen counter. After a day or two, you’ll be ready to take a bite of the sweet life.

Americans eat over 20 pounds of tomatoes per person per year. Make yours of the farm-fresh, in-season variety, and you’ll understand why. At Chicago’s Quay, the seasonal stunners star in heirloom gazpacho, crostini drizzled with chopped tomatoes, garlic and balsamic vinegar, and fried green tomatoes with rock shrimp and sweet corn ceviche.

Few crops demonstrate the importance of seasonal eating as effectively as corn. As soon as it’s picked, corn’s sugar content begins to convert to starch, making days-old varieties decidedly less sweet than the freshly picked ears at your local farmers’ market. Fortunately, corn is also a highly adaptable all-star, turning smoky and charred on a grill, livening up summer salads or starring on picnic tables after nothing but a quick boil all summer long.

Often dismissed as diet food, celery is versatile enough to be braised on the stovetop, dried and shredded into sea salt, or served raw in all of its crisp, crunchy glory. Recent health studies also show the stalks are rich in antioxidants and vitamin C, and have ample anti-inflammatory heart benefits.

America’s most popular melon, cantaloupes come to the table with heaps of vitamins C and A (a one-cup serving exceeds the daily recommended intake for adults) and metabolism-boosting potassium. Summer never tasted so sweet.

Filled with fiber and antioxidants, pears have been proven to lower risk of type 2 diabetes in women. The state fruit of Oregon shines at Portland, Ore.’s incredible, 200-vendor-strong farmers’ market, where bushels are sold fresh to local restaurants like Northeast’s OX. There, the succulent, seasonal fruit is tossed with olives and fresh thyme, and served atop cumin-roasted lamb loin.

Available year-round, potassium-packed sweet potatoes are harvested fresh in the fall. At SoBou restaurant in the W New Orleans – French Quarter, the tasty tubers get a decadent local twist: they are baked into sweet-and-savory beignets and served with roast duck, foie gras and a dusting of the Big Easy’s signature chicory coffee. Mercy.

Native to the Northeastern USA, vitamin C-laden cranberries grow in peaty deposits, called bogs, created by glacial movements some 10,000 years ago. In Wareham, Mass., the annual fall harvest is celebrated with a weekend-long festival of cooking demonstrations, culinary vendors and bog tours organized by an 1888-era farmers’ association.

In addition to their obvious links to fall holidays like Halloween and Thanksgiving, pumpkins and other edible squash are power players packed with magnesium, beta-carotene and vitamin K. How many other pie fillings can claim that?

There are over 2,500 varieties of apples grown in the USA. But, if there is such a thing as a cult fruit, sweet, juicy Honeycrisp is it. The Macoun-Honeygold hybrid is available for a few short weeks from mid-November to early December, so take a bite at a farmers’ market near you – while you can.

Turnips are harvested in the Northeastern USA in the late fall. Although the bulbous root vegetables physically resemble beets, they are most closely related to members of the mustard family like radishes and arugula. Roasted low and slow, they develop the soft, buttery quality of yams or sweet potatoes.

Bold, buttery quince is in season for just a few short months, so grab the apple-pear hybrids as soon you see them. Inedible raw, quinces can be poached, roasted or baked into tarts and pies. Got a bowl of farm-fresh fruit on the verge of turning? Core and quarter the leftovers, then boil with water and a touch of sugar to make a long-lasting jam sure to sweeten any season.

In sunny Florida, December is prime time for big, Vitamin C-rich naval oranges. Squeezed into juice, sliced into salads or served straight by the slice, they are sure to brighten up any winter meal – whether the weather outside is frightful or not.

Get your frond on: throughout the northeastern USA, fennel is now in season. The crunchy herb has unusual phytonutrients that give it ample antioxidant and immune-boosting capabilities. Which, at a time of year filled with holiday excesses, might be just what the doctor ordered.

A Guide to Seasonal Cooking

Benefits of Eating What’s in Season
Scroll to top
Close