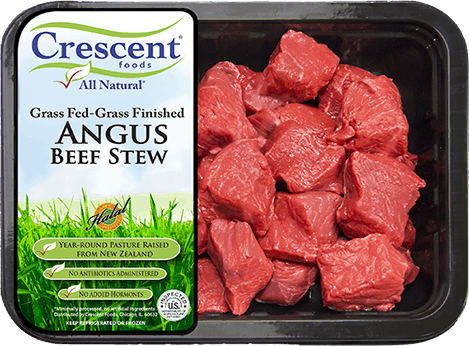 Place 1/4 cup of the flour and the measured salt and pepper in a large bowl and whisk to combine; set aside. If not pre-cut already, cut beef into 1- to 1-1/2-inch cubes. Place the meat in the flour mixture and toss to coat; set aside.
Heat the oil in a large, heavy-bottomed pot or Dutch oven over medium heat until shimmering. Shake off the excess flour from about one-third of the meat and add it to the pot. Cook, stirring rarely, until browned all over, about 4 to 5 minutes. Remove to a large bowl. Repeat with the remaining meat in 2 more batches; set aside.
Add the onion to the pot and season with salt and pepper. Cook, stirring occasionally, until softened and just starting to brown, about 5 minutes. Add the tomato paste, stir to coat the onion, and cook until the raw flavor has cooked off, about 1 to 2 minutes.
Sprinkle in the remaining tablespoon of flour and cook, stirring occasionally, until the raw flavor has cooked off, about 1 minute.
Return the meat and any accumulated juices in the bowl to the pot. Add the broth, bay leaves, and thyme and stir to combine. Increase the heat to high and bring to a boil. Immediately reduce the heat to low and simmer uncovered for 1 hour.
Cut the carrots, celery, and potatoes into large dice and add them to the pot (peel the carrots and potatoes first, if desired). Stir to combine, cover with a tightfitting lid, and simmer, stirring occasionally, until the vegetables and meat are knife tender, about 1 hour more.
Remove and discard the bay leaves and thyme stems. Stir in the peas and simmer uncovered until warmed through, about 5 minutes. Taste and season with salt and pepper as needed.