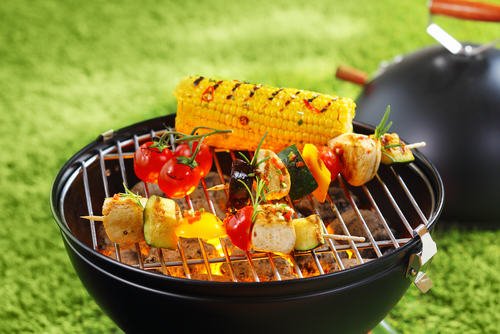 Food poisoning is usually mild, and most people get better within a week. But sometimes it can be more severe, even deadly, so it’s important to take the risks seriously. Children, older people and those with weakened immune systems are particularly vulnerable to food poisoning.

“The safest option is to cook food indoors using your oven,” says a spokesperson from the Food Standards Agency (FSA). “You can then put the cooked food outside on the barbecue for flavour.” This can be an easier option if you’re cooking for a lot of people at the same time.

If you are only cooking on the barbecue, the two main risk factors are:

This is because raw or undercooked meat can contain germs that cause food poisoning, such as salmonella, E.coli and campylobacter. However, these germs can be killed by cooking meat until it is piping hot throughout.

Germs from raw meat can easily move onto your hands and then onto anything else you touch, such as food that is cooked and ready to eat

Cooking meat on a barbecue

When you’re cooking any kind of meat on a barbecue, such as poultry (chicken or turkey), pork, steak, burgers or sausages, make sure:

Remember that meat is safe to eat only when:

“Don’t assume that because meat is charred on the outside it will be cooked properly on the inside,” says the FSA spokesperson. “Cut the meat at the thickest part and ensure none of it is pink on the inside.”

Some meat, such as steaks and joints of beef or lamb, can be served rare (not cooked in the middle) as long as the outside has been properly cooked. This will kill any bacteria that might be on the outside of the meat. However, food made from minced meat, such as sausages and burgers, must be cooked thoroughly all the way through.

Germs from raw meat can move easily onto your hands and then onto anything else you touch, including food that is cooked and ready to eat. This is called cross-contamination.

Cross-contamination can happen if raw meat touches anything (including plates, cutlery, tongs and chopping boards) that then comes into contact with other food.

Some easy steps to help prevent cross-contamination are:

Make sure you keep the following foods cool:

Make sure your barbecue is steady on a level surface, away from plants and trees.

The Fire Service advises covering the bottom of your barbecue with coal to a depth of no more than 5cm (2in).

With charcoal barbecues, only use recognized fire lighters or starter fuel and only on cold coals – use the minimum necessary and never use petrol.